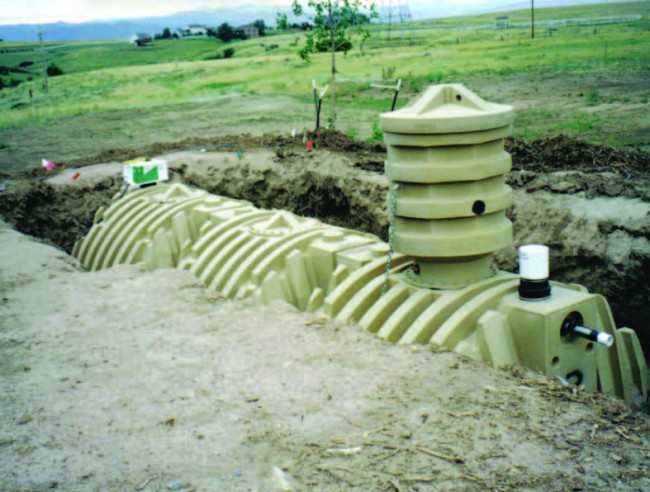 A cistern buried at the proper depth is extremely unlikely to result in problems associated with frozen water. Underground leaks can still occur, but these would more likely be associated with the water-pumping system.

An underground cistern is literally out of sight. Not only will your views be unencumbered by the tank, your quality of life may be improved by the absence of a large, industrial-looking vessel in your yard. This could also translate into a greater return on your investment when it comes time to sell your property.

Buried cisterns do not get in the way of many other potential uses of your property such as planting (plants and shrubs, though not trees), entertaining, etc. Just remember to avoid putting a permanent structure (such as a storage shed or a concrete patio) on top of an underground cistern—blocking future access if it ever needs repair or replacement. Many underground cistern materials can withstand vehicular traffic, but others cannot, so make sure your cistern suits your landscape goals.

Since no appreciable light enters an underground  cistern, it is unlikely that the harvested water will breed many forms of algae. This is an important advantage because one of the disadvantages of underground cisterns is that they can be difficult to clean.

Since the cistern is not exposed to sunlight and the water is well insulated by the earth, the water temperature in an underground tank will never be too hot for irrigation purposes. This means you could water from your underground cistern at any time of day (remembering, of course, that midday watering is not recommended and is often not allowed).

Disadvantages. The disadvantages of storing water underground are higher costs, more difficult access, increased safety concerns and the necessity for a pump.

For most people, the biggest disadvantage is the cost of installation. As a general rule, an underground system costs about twice as much as a comparable aboveground system. This often prices people out of the underground-cistern market right from the start.

Excavation and backfill, required for the installation= of both the cistern and its underground conduits, are the main reasons for the higher cost of an underground system. There are extra costs incurred by machinery and its skilled operator(s), designing and permitting a large excavation project and all of the properly executed backfilling and/or tamping that underground cisterns require. Another cost of burying a cistern that often surprises people is that of removing the large quantity of excavated earth that is left over at the end of the project.

Underground cistern systems often require longer runs of pipe, conduit and electrical wire, which adds to the expense side of the ledger. In order to get the necessary fall from conveyance piping (of 1/4 inch per linear foot) and in order to give the backhoe operator plenty of room in which to work, underground cisterns are usually situated farther from the house, and this means more pipe, conduit, electrical wire, etc.

If and when problems occur, having most of your= system buried can also become an issue. Repairing the tank wall of an underground cistern is typically much more difficult than repairing that of an aboveground cistern. Although rarely necessary when prefiltration is adequately installed and maintained, cleaning an underground tank becomes a challenging job.

Underground cisterns, even when empty, can be dangerous, and the process of installation includes inherent risks. OSHA regulations (http://www.osha.gov) must be followed at all times during the installation process, and access to cisterns must always be locked (whenever the tank is not being accessed or maintained). Your highest priority should be the prevention of any accident and injury associated with your cistern system.

Underground cisterns are not conducive to water distribution via gravity; they almost always require a pumping system to get the water out of the lower depths of the tank. Also, since underground cisterns need access and venting, both of which will protrude from the ground, some screening is typically required.