The Evolution of Ethics

Harriet Tubman escaped slavery in 1849. Exactly 100 years later *A Sand County Almanac* was published. At the outset of the most famous essay in that seminal book, Aldo Leopold describes how our ethics have evolved over time. When Odysseus comes back from 10 years of war and 10 years traveling home, he quickly hangs 12 of his slaves. In Mycenaean culture, nobody blinks an eye. Slaves were property, and a guy like Odysseus could do whatever he wanted with his property. Today, on Earth Day, we should wonder if our ancestors will look back at the way we treated our planet with as much disgust as we look back at the actions of Odysseus.

Personally, I'm elated that Tubman will replace Jackson. The video below is about an 11-year-old girl who wrote President Obama about putting Tubman on a bill. Now...if we could only get Leopold to replace Grant on the $50, we'd be heading into this century of climate crisis and resource depletion on a much stronger footing.

When the local paper reveals that there's been lead in the water of your hospital since (at least) 2011, the Flint fiasco seems closer to home.

One of many ways to harvest water!

We have known for some time that many plants have the ability to directly communicate with one another.  What has become more evident over the years is the amazing extent to which this is happening.  This informative piece in Scientific American delves into some of the shuttling of information and nutrients takes place beneath our feet.

"If I had the ear of a presidential candidate..."

Here's my solutions-oriented take on the Flint, Michigan, water crisis. Thanks, *Green Fire Times,* for asking me to write it! 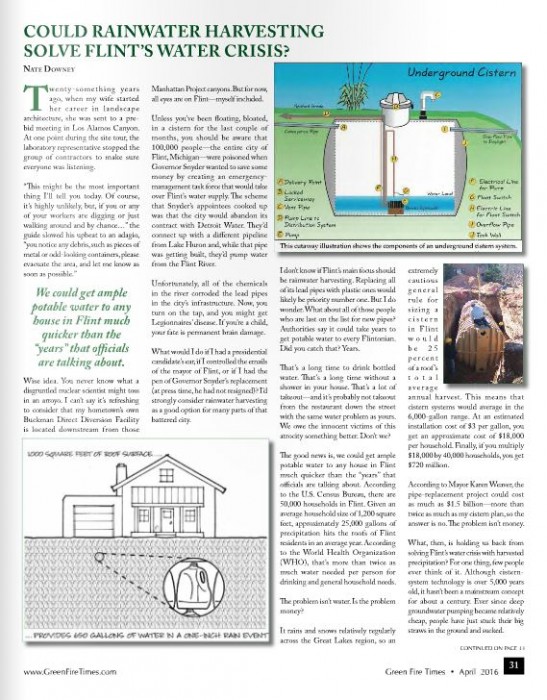