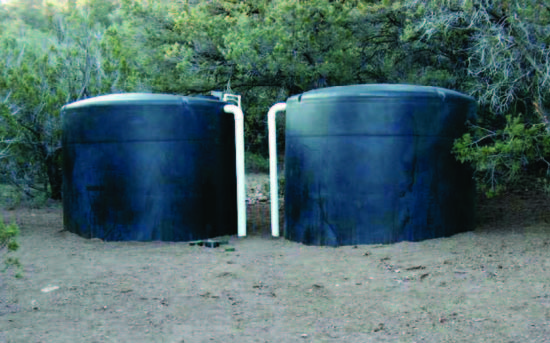 A partially buried cistern is a water-storage tank situated such that the bottom portion of the cistern and its pressurized pipe are protected by the soil from freezing. The remainder of the tank is exposed to the elements (particularly sunlight).

If your storage tank is small enough, it may be possible to excavate the hole for a partially buried cistern with picks and shovels as opposed to using a backhoe. If you dig the hole by hand, the cost savings could be considerable, but be aware that this is very strenuous work. Renting a backhoe can be cost-effective, but manual excavation makes the most sense in situations where backhoe access is difficult. In the case of new construction, consider excavating your hole when a backhoe is already on site—another cost-benefit of landscape planning.

Typically, the most important reason to partially bury a cistern is to keep your pipes from freezing. Before renting a backhoe, determine your local frost depth. (Contact your local County Cooperative Extension Office, http://cahe.nmsu.edu/county/ ). Then, if you plan to partially bury an aboveground cistern, make sure your tank can withstand the inward pressure on the tank’s walls at the selected depth when your cistern tank is empty.

Disadvantages. The main disadvantage of a partially buried cistern is that after all of your hard work digging, the tank looks like a smaller version of an aboveground cistern. Yes, money has been saved and the pipes are less likely to freeze, but many people will still want to invest in a fence or dense plants to hide the exposed portion of the tank.