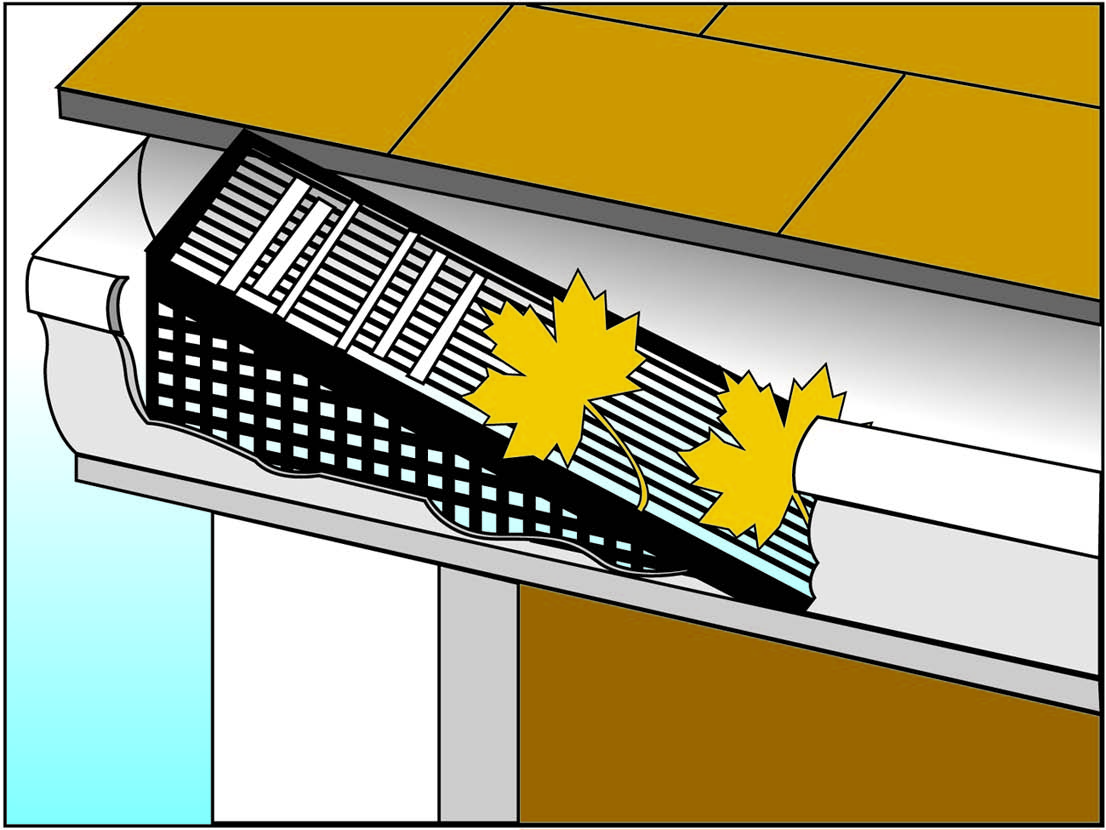 The conveyance system presents an easy and effective opportunity to filter the roof water being delivered to your cistern. You will have other chances to filter your water before distributing it to your plants—for example, in your cistern, in your pump house and during distribution through a drip irrigation system—but you should not neglect this first valuable opportunity. Conveyance, or “inlet,” filtration is your best defense against preventing particulate from getting into your tank and against the growth of algae inside your tank, both of which can clog drip irrigation systems and cause pumps to burn out.

Note that the kind of filtration described here does not remove toxins, viruses or bacteria. It is possible to eliminate these and other contaminants during the water-distribution process, but this type of filtration is not necessary for landscape irrigation purposes.

The need for precistern filtration increases as the number and size of mature trees around your roof grows. Branches, leaf matter, bird and animal droppings and other natural debris associated with trees can all pose slightly different problems later on if ignored and not effectively filtered out of the system.

The following conveyance filtration systems are neither “high tech” nor particularly expensive. However, replacing a number of drip irrigation emitters because of improperly filtered water can be a frustrating and costly experience. It is recommended, whenever practical, to install precistern filters and a standard particle filter between your system’s pump and any irrigation valves. When it comes to filtration, a redundant system means a clean system.

For roof-reliant landscapers, the first level of defense against allowing particulate into a cistern is a leaf screen. (Leaf screens are also known as gutter guards, debris traps and leaf catchers.) Typically, leaf screens are placed in gutters at the entrance to a downspout, although some types are designed to be placed at the bottom of a downspout. These devices allow roof water into the conveyance system while preventing some of the larger pieces of debris from being conveyed. Although leaf screens are effective and inexpensive methods of filtration, they are typically not considered adequate by themselves. (See Above)

Even though flat roofs tend to collect more debris than pitched roofs, leaf screens are not recommended for canales because as soon as a small amount of debris collects behind such a screen it begins to prevent roof drainage, which could ultimately cause the roof to leak. Sometimes a layer of gravel is placed in a canale to act as a simple debris filter. Most roof-reliant landscapers working with canales will install funnel drains, which also act as reasonably effective leaf screens.

There are a number of simple strategies for removing small particles of debris from the roof water entering your cistern. These can be divided into two categories: one type uses some form of filtration, and the other uses a method called the “first flush.” Neither type will prevent all particulate from entering your cistern, but each should yield a significant increase in your water quality. 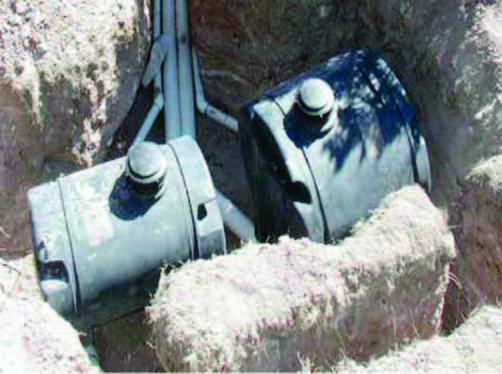 Above: Shows the installation of two traps


Inlet filter. An inlet filter is any of a number of various types of barrels, containing one or more filters, through which roof water is conveyed to a cistern. Inlet filters can be relatively self-cleaning when positioned at a proper angle and if they are sufficiently sized for the amount of water and particulate that will pass through. Many of these and similar products are available online at a reasonable cost. 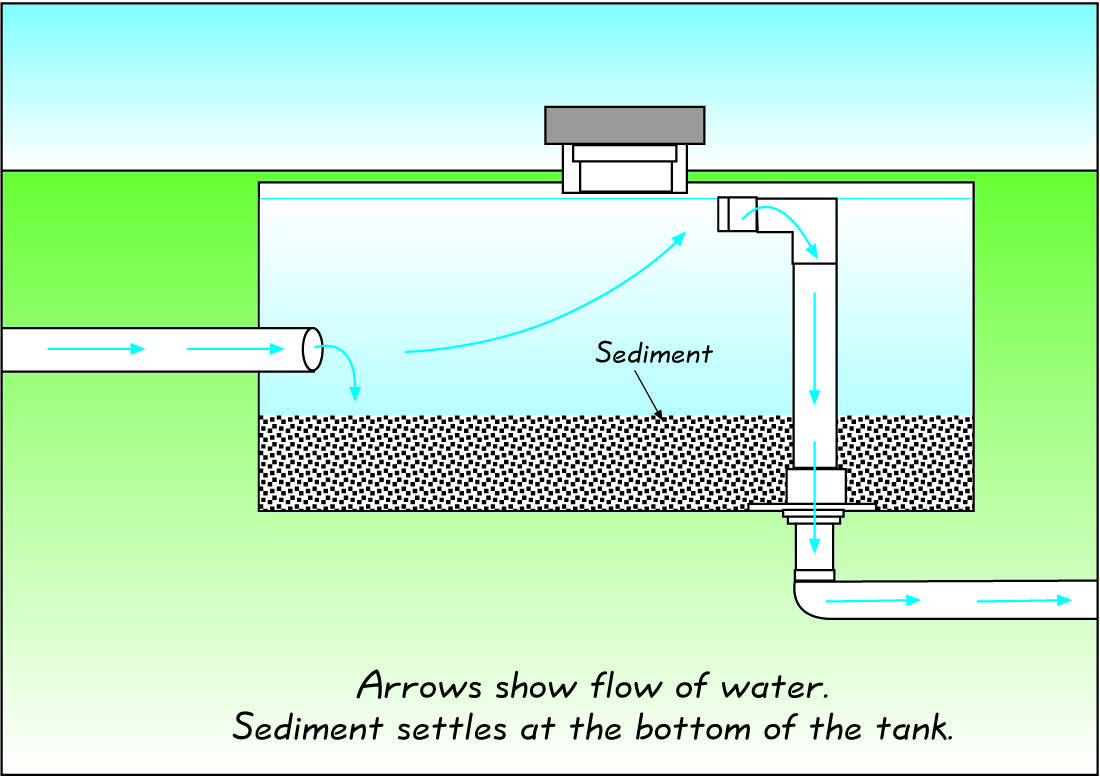 Above: Example of a sediment trap. The illustration depicts how water flows through a trap.

Settling tank. Like the first-flush devices described in the next section, a settling tank is not actually a filter but serves the same purpose as the particlefiltration devices described above, so they are included in the category of small-particle filtration devices. The basic operation of a settling tank is quite simple: water pours into the tank, debris settles to the bottom and cleaner water flows out the top toward the cistern. 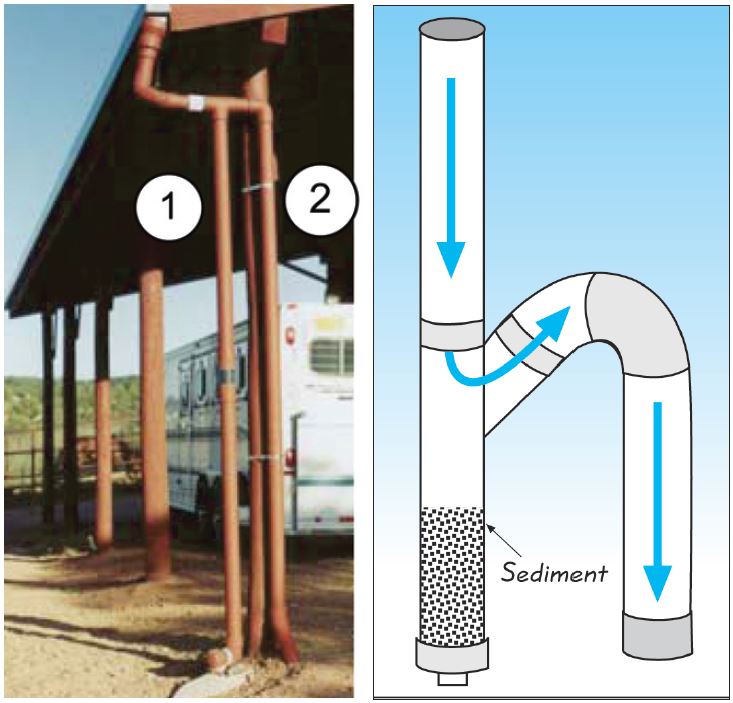 Above: Roof water is initially conveyed from the downspout into a pipe (#1) that dead-ends (preferably near a planting bed). After that pipe fills, the cleaner water flows through pipe #2 to a cistern. The cutaway illustration shows how sediment settles in the first pipe.

Dead-end pipe. The most common type is the dead-end pipe. Associated only with downspouts and not canales, these diverters direct the first quantity of water that comes off a roof into a pipe that dead-ends at a removable cap. The remaining roof water, which is always much cleaner than the “first flush,” runs straight over the dead-ended water and directly into the cistern via the remainder of the conveyance system. 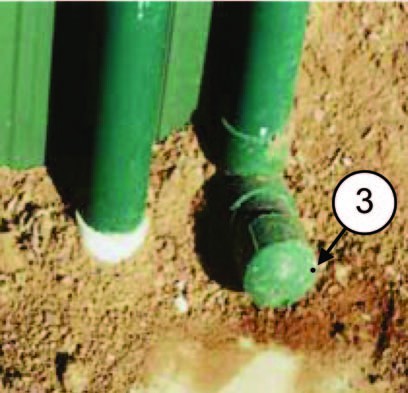 Above: The cap on the first-flush pipe has a small hole drilled in the cap. Positioning the hole at the “3 o'clock” position enables water to slowly drain from the pipe while leaving sediment behind. The cap can be unscrewed for cleaning out the sediment.

First flushes serve two purposes: the initial flush of dissolved and suspended solids is diverted and heavier sediments are continuously trapped. After a storm, the cap is removed and the first flush of water and debris drains away from the house (and optimally, into a nearby garden bed). This allows for the debris and particulate matter that was on the roof to be diverted away from the cistern and toward an appropriate place in the landscape. After the dead-end pipe has fully drained, you simply screw the cap back on. If a 1/8-inch hole is drilled in the cap at a “3 o’clock” or “9 o’clock” position, water in the dead-end pipe will slowly drain by itself. Debris in the pipe will still need to be cleaned out periodically.

Pulley pourer. A less common form of diverter, the pulley pourer uses a bucket, a pulley and a counterweight to pour first-flush water into neighboring garden beds. An empty bucket is set under a gutter or downspout with a counterweight equal to the weight of about two-thirds of a full bucket of water. When water pours off the canale, it fills the bucket to the point at which it dumps the first flush into a thirsty garden bed (or some other appropriate place). The system is manually set up between storms so that the counterweight keeps the bucket in a ready position.

Pulley pourer. A less common form of diverter, the pulley pourer uses a bucket, a pulley and a counterweight to pour first-flush water into neighboring garden beds. An empty bucket is set under a gutter or downspout with a counterweight equal to the weight of about two-thirds of a full bucket of water. When water pours off the canale, it fills the bucket to the point at which it dumps the first flush into a thirsty garden bed (or some other appropriate place). The system is manually set up between storms so that the counterweight keeps the bucket in a ready position.