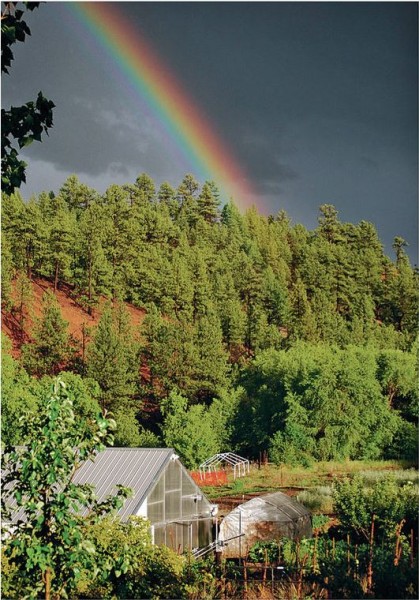 My *Permaculture in Practice* column this month features Apache Creek Ranch, the site of the Permaculture Design Course that I took with Bill Mollison back in 1992. The ranch is for sale after decades of successful work by the same owners (who hosted and took the same course with Mollison). 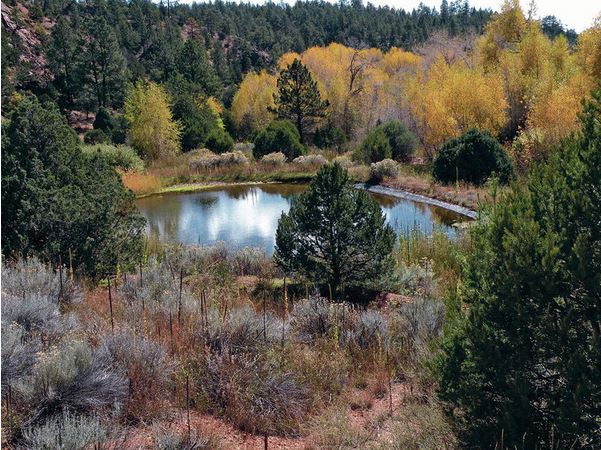 Just past Camp Stoney and that button-cute chapel in Cañada de los Alamos, there’s a scenic property called Apache Creek Ranch. My mind was fully blown there in 1992 when Bill Mollison, the charismatic first prophet of permaculture, taught a two-week intensive class about how to save the world.

Less than a year out of college, I knew our planetary ecosystems needed help, but before I took that course with Mollison, environmentalism meant mostly protest. “Stop!” we’d beg. “Don’t!” we’d implore. “No!” we’d beseech. Humanity’s trajectory was potentially tragic, but few people did much to address the causes of our problems. Carrying organic foods in cloth bags was a thing, but our culture primarily treated symptoms.

Permaculture offered a constructive alternative. By providing a perspective based on nature’s patterns, the practical philosophy gave people mental and physical tools for becoming productive contributors to a greater society full of people, animals, plants and living soil. Looking back, permaculture in 1992 was Aldo Leopold’s embryonic concept of a “land ethic” grown into a wide-eyed child.

Heading into 2016, the kid seems to have reached adolescence — capable of much, but errant and often sleepy. We rarely have to define “permaculture” anymore, but we still have a long way to go to ensure civilization’s resilience. As resources dwindle, seacoasts rise and a plethora of permaculture videos are posted to YouTube, could there be a better time to purchase Santa Fe’s premier permacultural property?

Now’s your chance. The ranch is for sale (see http://www.apachecreekranchsantafe.com), and it’s been in the same hands since the owners hosted that epic 1992 class. Countless fruit trees sprinkle the landscape. Pastures, paddocks and fields overflow with deep soils, essential herbs, luscious edibles, gorgeous flowers and alimental cover crops. The ranch boasts more than 300 acres, various lots and a dozen buildings, including an 1,800-square-foot greenhouse complete with 3,000 gallons of cistern storage and a score of healthy raised beds. The fully fenced property features four lined ponds and myriad structures that slow and redistribute runoff. Stormwater and snowmelt soak into the ground and gurgle back up. Huge stands of cottonwoods and willows sustain critical habitat for precious wild things.

The land was miserably overgrazed and totally de-beavered when I experienced it over two decades ago, but given its current state of vitality, the ranch is in some ways unrecognizable. There’s so much more shade, wind protection and biodiversity. There’s so much more water even during the driest times of year.

There’s so much more to eat, too, and it’s really delicious. As we popped out of the sunroom and walked to my truck, the owners handed me a big bag of apples, a couple of jars of homemade jam and a hefty package of chokecherry jerky, fabricated out of elbow grease and a nearby thicket.

Back home, the jerky couldn’t have been more popular, and the apples were soon gobbled up, but we’re saving the jam for a special occasion. It’s not every day that such a sweet and sacred place is sent to market. The moment requires some reverence.