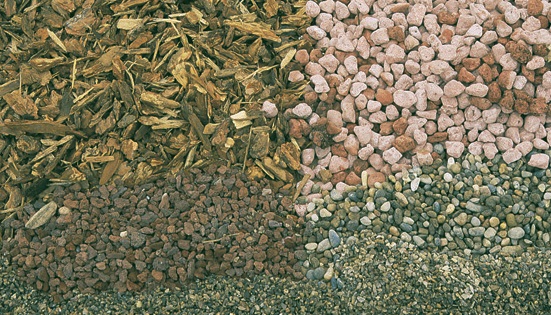 After building healthy soil by adding compost and planting water-thrifty plants in the appropriate locations, you will want to further conserve water and promote plant health by spreading a thick layer of mulch over your improved soil. Mulch does five critical things for soil: it shades, insulates, prevents erosion, adds nutrients (especially if fibrous mulch such as shredded bark is used) and obstructs weed growth.

Shading the soil with mulch prevents water loss due to evaporation and also provides habitat for important microorganisms.

Insulating the soil from ambient air temperatures prevents plant stress caused by the rapid temperature changes that can occur in the high deserts of New Mexico. Soils and plant roots do not respond well to intense heat or cold, so having a blanket of insulation in the form of a thick layer of mulch keeps soil at a more constant temperature. This is equally important in winter and summer.

From a soil-erosion standpoint, mulch can help prevent wind from blowing the soil away. Mulch can also help prevent erosion caused by major storm events. Even though its effects are usually less visible than those from storm-water-induced erosion, wind-induced erosion can have a larger negative impact on our fragile soils because of the frequent (sometimes daily!) blowing that unprotected, exposed soil receives.

Simply by creating a microclimate suitable for microorganisms, even inert mulches such as gravel will help to increase the nutrient level in soil. While organic mulches (such as bark, straw and pecan shells) will provide more nutrients than inert mulches, they tend to need replenishing on an annual or biannual basis. By contrast, inert mulches can sometimes last years before needing to be replenished.

Typically, the thicker the mulch, the more effectiveit will be as a weed barrier. Smaller and low spreading plants may be mulched two inches deep until they grow larger, while larger trees and open areas (including pathways) should have a minimum mulch depth of four inches.

If perennial weeds are a problem, a water-permeable commercial-grade weed barrier, such as landscape fabric, can be placed underneath any type of mulch. (Remember, do not use nonpermeable plastic as a weed barrier.) Weeds that grow out of any mulch can sometimes be difficult to control, but weeds that grow out of gravel mulches can be extremely difficult to extract. Rock and gravel mulches should be weeded often, before weeds can establish large root systems.

Gravel and stone mulches have many benefits, but they can reflect light in a manner that is often too bright, and these mulches can create “heat islands” if overused. Breaking up stone-mulched areas with one or two organic mulches can improve the aesthetics of your roof-reliant landscape. The most interesting and perhaps most important waterwise aspect of stone mulch is that it can create moisture; condensation collects underneath the rocks when there is a change in ambient air temperature in a short period of time.

The smallest form of stone mulch is called crusher fines, which are extremely small pieces of commercially available gravel. They are often not much bigger than grains of sand and are typically rolled or tamped into place. They provide a clean, relatively natural look since their color often resembles the ochre tones that we recognize in our native soils.

Other common mulch materials include bark, wood chips and pecan shells. A less commonly used mulch, straw, is one of the more effective mulches for retaining moisture and providing nutrients for your soil. Contrary to popular belief, straw will almost never blow away if properly laid, and the aesthetics of straw are quite natural because the sun quickly bleaches out the bright yellow hue of a newly opened straw bale.

Bark mulch and pecan shells help soil retain moisture, and they add nutrients to the soil as they decompose. Compared to gravel, these mulches are lightweight and easy to install. However, in areas with strong winds these lighter-weight materials will be the most likely to blow away.

The types of plants selected for the landscape can help you determine what kinds of mulch to use. Less heat-tolerant, more moisture-loving plants prefer fibrous mulches, while xeric (sun- and heatloving plants) prefer gravel and stone mulches. For example, many desert wildflowers grow much more vigorously and live longer when mulched with crusher fines or small pebbles.