It was a Wild Day for kids’ fishing

The banks of the Santa Fe River were swelling with water and people. It was raining (again!) and the City Different’s children’s fishing derby had lured a quietly effervescing crowd of anglers. If they came fishing for food, fun, and sport, they got all three. 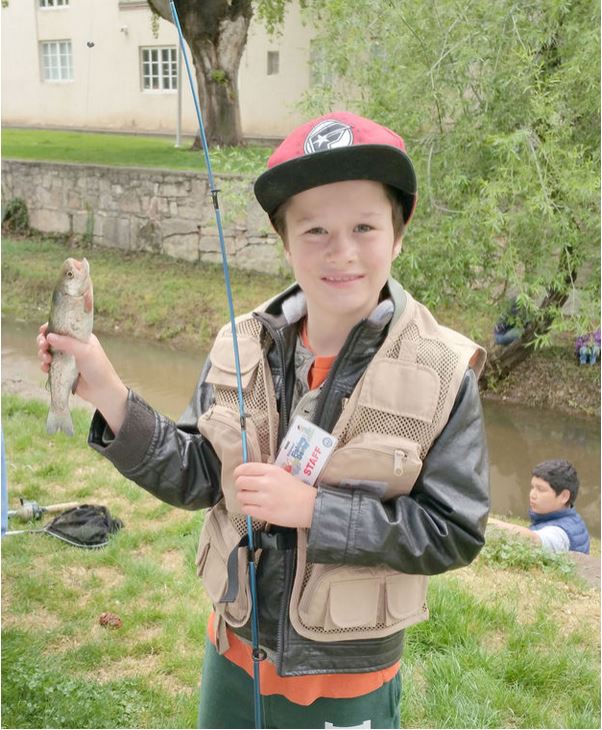 All anyone needed was an adventuresome child under 12 and a willingness to troll along at dawn on a Saturday. Rods, reels, hooks, weights, and bait were free for the taking. The New Mexico Department of Game & Fish had stocked the river the day before and name-tagged officials clad in multi-pocketed vests were giving hands-on cleaning, gutting, and decapitating lessons.

Even if you preferred to toss back your catch, you went away emptyhanded only by choice. Booths and tables overflowed with Frisbee-filled swag bags, free knives, and many prizes donated by local businesses like Collected Works Bookstore & Coffeehouse and High Desert Angler, and nonprofits such as River Source and the Santa Fe Watershed Association.

But the event could have gone either way. Game & Fish had released 500 good-size trout at Alameda and Old Santa Fe Trail at 11 a.m. Friday. By 1 p.m., big rains had city staff worried about the fate of the fish-holding pond just east of the bridge at Don Gaspar. Would their structure fail? Could the event be held downstream? Would it be cancelled?

After a slinky tease from the sun, by mid-afternoon the sky grew fiercely dark, and the rain intensified. The shoals of our ephemeral brook deepened. A fount roared madly over the next day’s scheduled honey hole. Without rapid cooperation among the people from Santa Fe’s Public Works Division, Parks Department, and Water Division, and a large crew from YouthWorks, the trout would be lost.

Out of nowhere, a half-used roll of chicken wire was hauled across the broadened bourn. Miraculously, six or eight reasonably straight T-posts appeared. Then came the snow fencing and a fireman’s line of sandbags. Toss in some sophisticated hydrology, the back of a napkin, and a small tackle box of creativity, and it all came together.

At dawn, event organizers were happy to see so many fish biting. For a short while, the rain even stopped. But it gradually waded back. Finally it poured buckets before turning into a gunky snow.

A magical moment, yes, but it was time to neither fish nor cut bait. I was worried about parts of our garden that needed to be protected from freezing temperatures. Our fresh-caught trout dinner was bound to be delicious, but I had no plans to trade our happy edible beds for the overtly freakish conceit of fishing in the typically desiccated riverbed of a once consistently flowing river.

We drove home, and safely stashed the ice-bagged fish. In the garden, we cast row covers over our beds and hooked pocketsful of extra-large, black-and-silver paperclips into place. When the blizzard stopped, the sun nibbled at thick schools of snowflakes that had accumulated in the crannies of our backyard reef of metal, wood, and plastic. The snow soon began to melt, sinking landward.