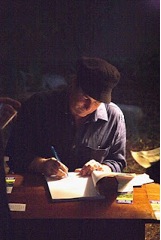 Thanks to all who came to my book-launch party the other night! Everyone who was there knows what a blast it was, and even I (who did most of the inviting) was surprised at the size of the multitude. Even though some of my favorite people in the Santa Fe area couldn’t show up, most of them did. We’re guessing we had between 200 and 250 people packed into our backyard, but a doctor in attendance told Melissa today that it was more like 300 including all of the kids. Whatever. What’s important is this:

1. After an hour-long very-light drizzle, it rained like crazy for a couple of minutes at the exact time the event was scheduled to start, and then it cleared up completely for the rest of the night. Since it was obvious that there was little chance of pulling the event off under our roof, many guests saw this as an auspicious sign of something-or-other, something big. (In contrast, I think I saw it as a shame that we weren’t going to get even more rain into our cistern.)

2. Everybody seemed to be having a great time, and many stayed late into the night (including signer-songwriter Nelson Denman who is even working on a catchy anthem—appropriately called Harvest the Rain—for the book tour and beyond)!

3. I got to sign and inscribe books for nearly four hours straight! Writing the inscriptions was a total blast. In order to keep the line moving, I had to write pretty much the first thing that came to mind. Some of the pithy phrases came out perfectly. Others…maybe not so much…But at times someone would say something halfway through that would cause me to change the whole direction of the inscription in mid sentence. Pulling off those exercises in spontaneous creativity may have been the most fun of the whole book-writing process (which ranged from almost gruesome to pretty darn fabulous on any given day)!

The only time I wasn’t signing books occurred just after 7pm when it was my turn to take the microphone. My plan was to thank everybody who played a role in the creation of the book, but with 30 people waiting in line, I decided to truncate the talk. I’m not very good at waiting in lines, so I was quite afraid of losing a potential reader to a too-wordy speech. So I went to plan B, which meant be sure to thank all of the teachers in my life, all of the farmers in northern New Mexico, Gramma Adams who taught me how to compost, cover photographer Charles Mann, portrait photographer Jennifer Esperanza, long-time cohort Tom Knoblauch, illustrator George Lawrence, proofing editor Barbara Doern Drew, copy editor Steven J. Schmidt, and my wonderful wife Melissa McDonald.

Ironically, my plan for this blog entry was to make sure I thanked those who didn’t quite make the above list, but alas I’ve gone on too long already here, so it’ll have to wait until tomorrow’s blog post.